April 12, 2015
Its been a busy start to the decking season here in Sunny, (most of the time) West Wales.
We've been doing a lot of work in Aberdyfi/ Aberdovey with a few jobs elsewhere including Machynlleth, Corris and other mid and North Wales towns and villages.

Here's a nice summer house decking project we recently finished. Space was tight as the deck is also the main entrance to the rear garden, so access onto and off the deck was created by adding a stair case at each end to tie in with existing path ways.  The owners added the bunting but we really like the way it matches up with the shed colours. 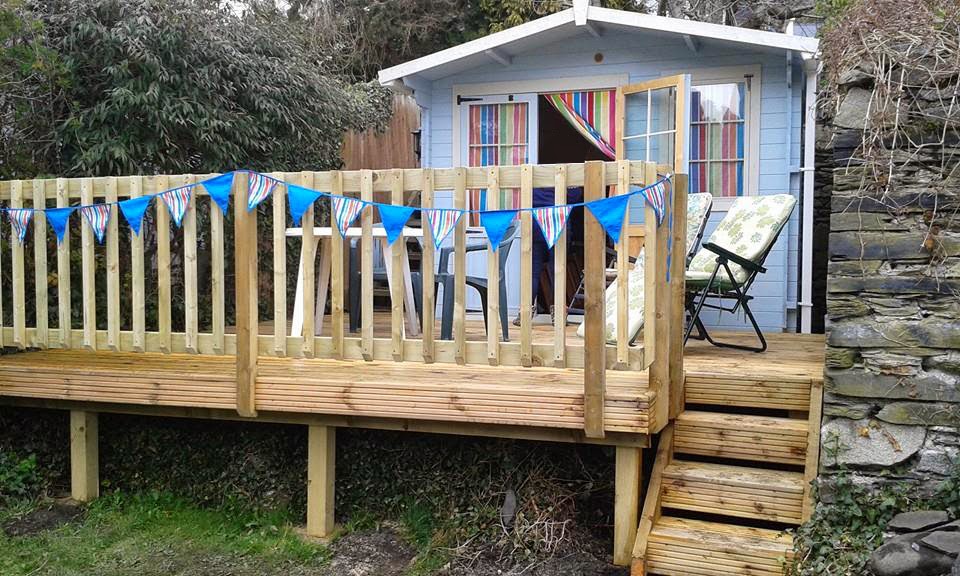 Ive been back modelling decks on CAD packages recently to help clients understand or visualise how their designs will look before they're built. Heres a recent deck design with a three sides staircase we've been working on... 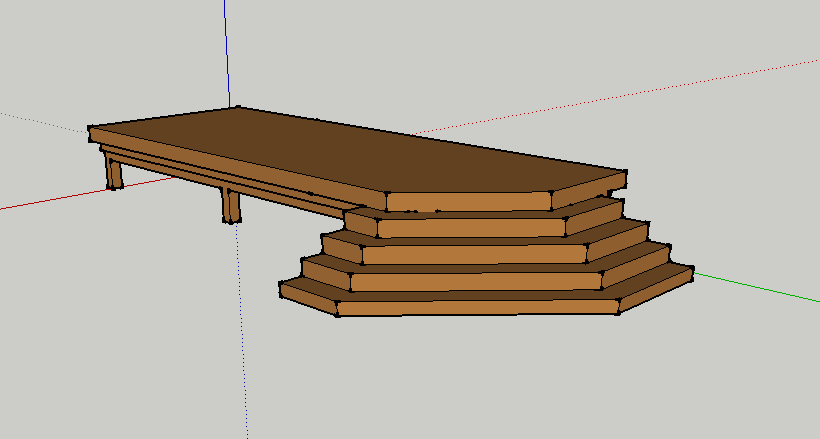 Not quite as fun as building new timber decks but we've also been cleaning and re staining existing decks in readiness for the season ahead. Its mazing how much dirt builds up on decks over a year of heavy use and to keep decks well maintained its good to clean back and re-stain once a year, even if just using a colourless clear preservative.

Finally, fences have been really popular this early spring. we've been doing a lot of feather edge fencing on commercial and domestic locations, including one on a new development at Aberdyfi golf club. This is our general feather edge style of fencing,  (usually one 6inch kicker plate at the base not two.)

Finally, we've also build a bridge for a garden separated by a stream, it was great fun to build and well have a photo up of the finished job soon as well as some photos of recent slabbing and block work constructions. In the mean time, if you would like us to quote a decking, fencing or other outdoor carpentry job for you we'd be happy to come over and take a look or chat over ideas. We generally work around the mid wales area, but are also happy to travel to North and South Wales to undertake timber decking projects. Thanks for taking a read...
Shem 07739031593

Popular posts from this blog 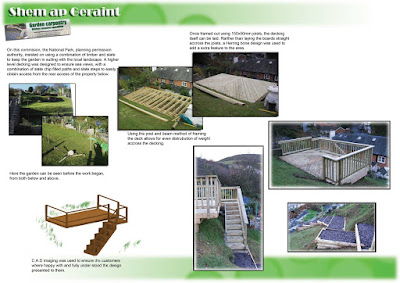 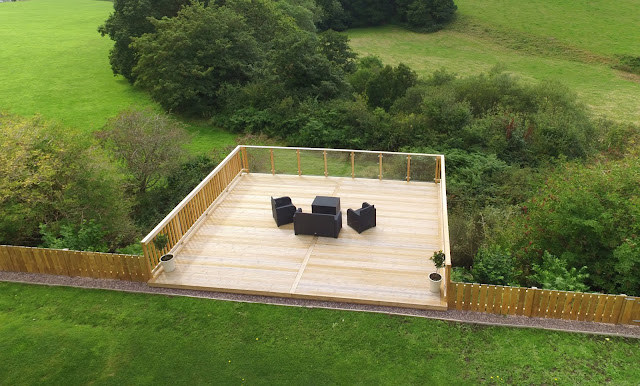 We've had some great customers to work with recently, again! It's great being able to design projects with customers that have a real vision for what they want; and we love making the idea a reality. First up, heres some aerial photos of the high level deck with built on an old railway embankment over summer  High level timber deck with Glass Panels on front elevation 5 Meter high front legs cut in Local Douglas fir levelled off this sloping garden with ease!  We call this a Garden Extension. This deck gave these home owners an extra 55 square meters of Garden Living Space If you have a sloping garden you'd like turning into living space, please drop us a line for a free quote. You may be surprised at how affordable it is, (we actually prefer building high level decks to ground level ones)
Read more

The first caravan deck of the crazy season! 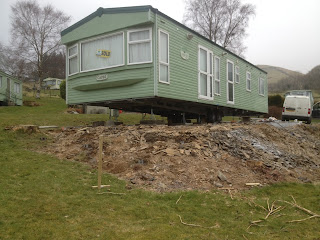 So its kicked off! The sun has shined for the best part of three weeks here in sunny mid west Wales. The phone has been crazy, as has my quote book, and its all go. Here's the first of this years caravan decks, finished just in time for open weekend at Cwm Llynau here in the Dyfi valley. Its still not quite finished as we have to go back to box off under neath the caravan and along the edge of the decking, so Il add another photo later in the week once this is done. Here it is before. As you can see theres a substantial difference in height along the edge of the caravan. This would have made constructing a patio very timely and expensive. Decking was once again the perfect option!  Heres the finished job, minus the caravan cladding as mentioned above.  Teh view off the front is pretty awesome as well, especially when the planes pass below! A fairly regular sight here in mid North wales Hope your all enjoying what seems to be a great early start to
Read more

or email us on gcdecks@gmail.com 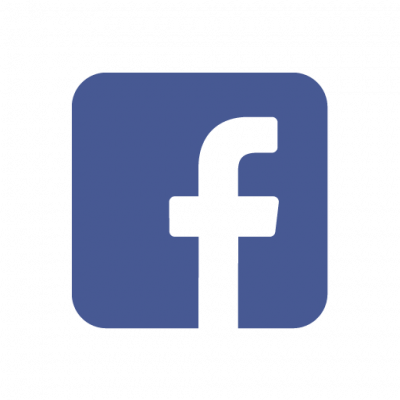 Shem at GC DECKING, (Garden Carpentry) has over 20 years experience in designing and building decks, fences, cabins, sheds and more. With a background in Cabinet making and a design degree your in safe hands! The website is currently being updated so if there's something you can't find please just ask! What was a timber decking company is now a timber, metal, composite and glass decking company to suit the needs of your project. We're happy to advise on the best materials for your needs and budget. We're especially enjoying using local materials to create sustainable and beautiful outdoor living spaces at the moment.